Ambala is one of the significant districts in the state of Haryana. Located just about 55kms from the state capital Chandigarh, Ambala has a rich and diversified culture. In fact, it is the only region in Haryana with a large number of Punjabi speaking populace. Administratively, District Ambala has been divided into two sub divisions - Ambala City and Ambala Cantonment (also known as Ambala Cantt). Both these divisions are at a distance of just about 3 kms from each other. Ambala Cantt has the most famous Indian Air Force Base, having said to be established by the British, within its boundary. 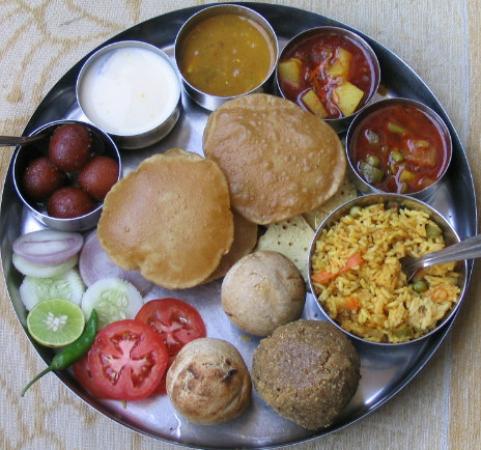 The cuisine of the beautiful city of Ambala, as well as the entire state of Haryana, is well known because of its simplicity and healthiness. The essence is in keeping the food fresh and wholesome. The food here is prepared without any fuss or ruckus. The food in Ambala has the flavor of the culture of Haryana in it. Just as the culture us simple, so is the food of Ambala. Though it is simple, yet it has nutrition.

Haryana is famous as the ‘land of rotis’ due to the fact that people here are very fond of having different kinds of breads. The most common of them are the rotis made of wheat, gram flour and bajra. Bajra Aloo Roti and Besan Masala Roti are the known specialties of rotis in Ambala. Everyday dishes in Ambala food include Kadai Hara Cholia, Singri ki Subzi, Gajar Methi, Tomato Chutney and Bathua Raita.

As Ambala is close to Punjab, it has borrowed many of its cultural and food elements from there also. For this reason, Makki Ki Roti, Sarson Ka Saag, Buttermilk (lassi), milk and curd also hold an important part in the cuisine of Ambala.
In the rural parts of Ambala, people generally prefer to skip the breakfast and eat lunch directly. The afternoon meal includes loaves prepared from gram flour or bajra. The evening meal of dinner generally comprises of bajra khichdi (porridge), moong dal with rice. This meal is a wholesome nutritional one.

Urban Ambala has a slightly different scene. Here people do no skip breakfast. Lunch is kept light and dinner can be very assorted consisting of vegetables and meats.

During the summer time, buttermilk, chaaj and thandai are the common drinks. All these are made from milk and milk products and give a cool effect even in the scorching heat of Ambala.

Festivals in India are commonly associated with a host of sweets and delicious foods. Some of the traditional festival foods of Ambala include Mal Pua, Kheer, Churma, Peda, Laddu and Thandai (traditional drink made from milk). Butter and ghee are commonly used in the foods of Ambala and are important ingredients in the daily diet of Ambala people. Ghee is generally churned out freshly in the homes and is known as ‘nooni ghee.’