Gurudwaras have always stood tall as the upholder of the social and spiritual teachings of the Sikh religion. The city of Ambala also houses a number of serene Gurudwaras that are an attraction to thousands of disciples all through the year. Although these Gurudwaras are mainly visited by the Sikhs residing in Ambala, a lot of tourists have also started visiting here over the years.  So, no matter you are a follower, or just a tourist searching for a calm and pure environment, a visit to these Gurudwaras in Ambala is a must. 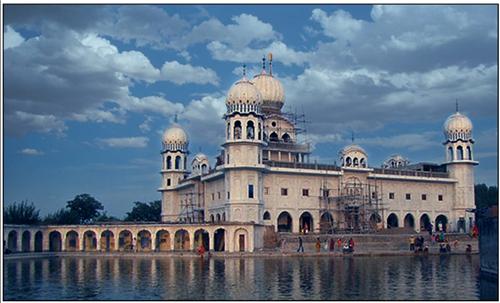 Given below are the details about some of the famous and historic Gurudwaras in the city of Ambala:

This is one of the most important Gurudwaras in the entire Haryana state. Dedicated to the ninth Sikh Guru, Guru Teg Bahadur, Gurudwara Shish Ganj is visited every year by thousands of people from all religions and castes. People offer their prayers and pay respect to the deity.
The historical aspect of this Gurudwara is that during the Mughal rule, Emperor Aurangzeb wanted Guru Teg Bahadur to adopt Islam religion. On his refusal, Aurangzeb ordered his decapitating. After this, two of the brave followers of Guru Teg Bahadur took his head from Delhi to Anandpur Sahib. They took a halt at Ambala and stayed here at the night. Soon after, a huge Gurudwara was established here.

Badshahi Bagh Gurudwara is another historic Gurudwara that catches the attention of a lot of tourists to Ambala. It is dedicated to the tenth Sikh Guru, Guru Gobind Singh. In 1670, while on his way to Delhi, the Guru took a halt at Ambala where he met a Peer who was hauling a hawk. If tales are to be believed, the Peer asked Guru Gobind Singh to have a fight between his own hawk and that of the Guru. However, judging his evil intentions, he refused. He then suggested the Peer to make his hawk fight with two sparrows that were sitting nearby. After the Peer had agreed, the Guru signaled the sparrows to clash with the hawk. Following his instructions, both the sparrows badly injured the hawk. After some time, the hawk died.

This incidence made the Guru utter his famous lines: “Chirion se main baaz taraun, Tabe Gobind Singh naam kahaun.” It means – It is when I make sparrows to clash with hawk that I am called as Gobind Singh.

Gurudwara Lakhnaur Sahib is one of the prominent pilgrimages dedicated to Guru Gobind Singh. As per narrations, Lakhnaur was the paternal village of Guru Teg Bahadur Singh’s wife, Mata Gujari. Throughout his upbringing, Guru Gobind Singh stayed at his mother’s native village. According to parables, Guru Nanak also visited this place in 1499 AD. The pace is respected as it is here that Guru Gobind Singh became skilled at the art of gatka baazi, neja baje, dhal talwar, teer-andazi, khido khundi and handling weapons.

Gurudwara Manji Sahib was built after the sixth Sikh Guru, Guru Hargobind Singh, after he visited the place when he was going to meet Jahangir. The Gurudwara has a small pool and a well which is believed to be built at the time when Guru Hargobind Singh stayed here.  The sikh community established a commemorative platform at the place and named it Gurudwara Manji Sahib as a mark of respect to the rope bed used by Guru Teg Bahadur at the time of his stay.

Apart from the above mentioned Gurudwaras, the city also has a number of other Gurudwaras where you can visit and pay reverence to the Guru. Some of these are:
Whenever you visit Ambala, make sure you visit most of these Gurudwaras in the city. You’ll just love the peacefulness and the purity here.